Two days ago, the Intellectual Property Rights Enforcement Directive (IPRED) passed in Sweden. The law requires that Internet service providers turn over the IP addresses of file sharers to authorities in cases of suspected copyright infringement.

The chilling effect this law has had on Swedish Internet traffic is palpable. Traffic metric site Netnod Internet Exchange shows that since IPRED was passed on Wednesday, traffic has dropped by around 40%.

This chart shows aggregate Internet traffic in Stockholm, Sweden for the last month. Note the peaks of the last two days are significantly lower than any day in the past month, and today's count, while not yet peaked, is below half of last month's average.

The Swedish Anti-Piracy group Antpiratbyrån issued a statement unequivocally linking the drop in traffic to IPRED. Anti-piracy lawyer Henrik Pontén said, "The majority of all internet traffic is file sharing, which is why nothing other than the new IPRED law can explain this major drop in traffic."

Swedish language newspaper Aftonbladet reported today that the first major "bust" based on the law has taken place. Two 29 year old men from Skovde were taken into police custody for sharing movie files in what was called "an international ring" of illegal file swapping. 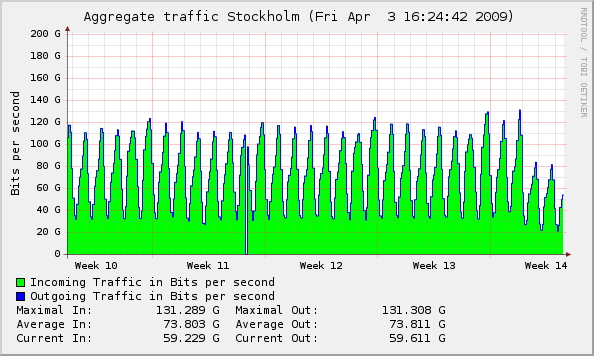