The PC is a dead parrot 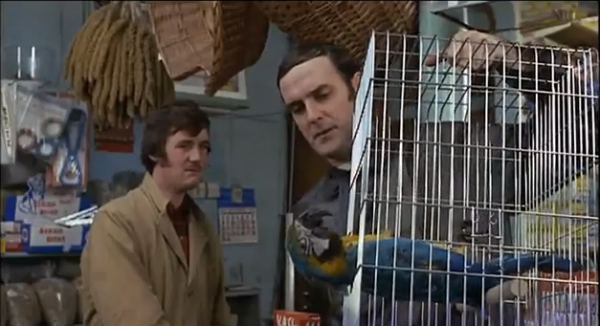 Second-quarter PC shipments are grim. They're flat globally, but down 5.7 percent or 10.6 percent in the United States, depending on whether Gartner or IDC counts the numbers. IDC puts Mac shipments down for the first time in years (Gartner disagrees). When the malaise hits Macs, Cupertino, we have a problem.

Is it the calm before the big sales storm or the new normal, as consumers and businesses snap up smartphones and tablets? There's no easy answer until Apple and Microsoft ship new operating systems. Likely, it's combination of both, as manufacturers buttress against the slowest sales quarter of the year by cutting back channel inventory and preparing for dramatic changes in computing purchase priorities. The one certainly: The quarter sucked spoiled eggs cooked over-easy.

Nailed to the Perch

To qualify right up front: Both analyst firms measure shipments into the channel and not sales out to businesses or consumers. Lower shipments don't necessarily mean slower sales, but do act like a canary in the coal mine. If the bird drops dead, run for your life!

The question: Is another bird metaphor more appropriate, in describing the state of the PC market? From classic Monty Python "Pet Shop" -- you know, dead parrot -- skit:

He's not pining, he's passed on. This parrot is no more. He has ceased to be. He's expired and gone to meet his maker. He's a stiff, bereft of life, he rests in peace. If you hadn't have nailed him to the perch he'd be pushing up the daisies. He's rung down the curtain and joined the choir invisible. This is an ex-parrot!

Is the PC market nailed to the perch? In the United States, yes, as buyers pine for smartphones and tablets (iPads, really) more than dead PCs. "Consumers are less interested in spending on PCs as [they] are other technology product and services, such as the latest smartphones and media tablets that they are purchasing", Mikako Kitagawa, Gartner principal analyst, says. "This is more of a trend in the mature market as PCs are highly saturated in these markets".

The personal computer still breathes in emerging markets, but is on life support in others (Gartner says shipments fell 1.7 percent in Latin America while rising 1.9 percent in Europe, Middle East and Africa.)

Perhaps it's time someone admitted that smartphones and tablets sap PC sales. There's a trend here. "In the second quarter of 2012, the PC market suffered through its seventh consecutive quarter of flat to single-digit growth", Kitagawa says. Seven straight quarters? Is it any coincidence that Apple started selling the iPad eight quarters ago? Don't answer "no" too quickly. End the denial and accept the future. The PC era is over and in transition to the cloud-connected device era. 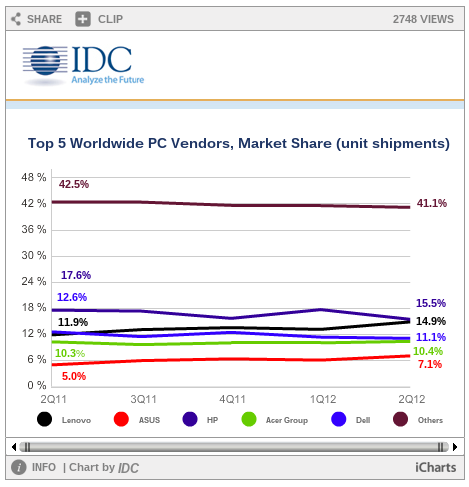 Repentance, as they say, is good for the soul. Looks like Needham & Company analyst Charlie Wolf is the newest believer in iPad, and its sucking sales away from PCs. Less than 12 hours after Gartner and IDC released PC shipment data, Wolf issued an unusually long report with an unusual admission -- that his iPad sales estimate was "hastily formulated". He suddenly raised iPad shipment projections from 13.5 million -- to, whoa, get this -- 20 million for second quarter! Wolf now believes Apple shipped more tablets than phones. Well, at least someone sees that parrot for what it is. Dead. Nailed to the perch.

But singling out smartphones and tablets is simplistic perspective. The PC market is also in transition to two major operating system launches -- OS X Lion later this month and Windows 8 in October. "In this context, consumers are delaying purchases, and vendors and retailers are slowing down their PC activities to clear existing inventories", David Doud, IDC research director, says. "The situation is exacerbated by consumer notebook saturation, a slowing replacement cycle in the commercial sector, and the big macro-economic and political events affecting confidence and spending".

Typically, second quarter is the slowest sales period of the year. If there is any time when manufacturers and retailers should worry about inventory levels, Q2 is it. With OS X and Windows 8 third- and fourth-quarter stories, Q2 is time to cull stock. Hence, shipments are lower, which, again, doesn't mean splat sales. 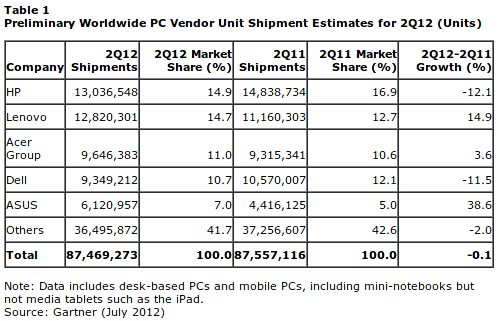 "The announcement of a Windows 8 launch date, as well as broader communication of new features in the OS, are key steps that would help to address uncertainty about new product availability and help consumers and channels plan their purchases", Jay Chou, IDC senior research analyst, says.

IDC analysts are optimistic Windows 8 will pull the PC market back from the brink. But what if it doesn't? What if "Windows 8 is a flop" as colleague Wayne Williams predicts. Plenty of people will blame Metro, but what if it's more about smartphones and tablets? Tip-off: Mac shipments, which fell 1.1 percent year over year in the United States but grew 4.3 percent, by Gartner's reckoning. Implications: iPad is cannibalizing Mac sales, even as it dents Windows PCs. 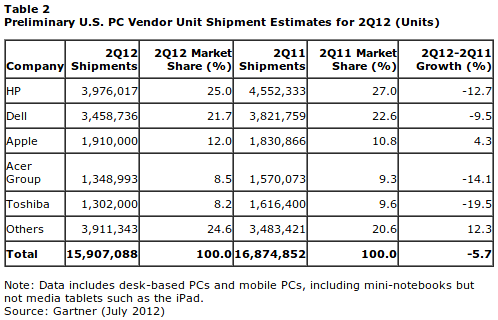 In fourth quarter 2011, iPad was 16.7 percent of total PC shipment volumes. If Wolf is right: 22.9 percent in second quarter. That measure is just to reference growth. Gartner and IDC public numbers don't reveal how much iPad sales take away from PCs. Again, those are global numbers and in many other markets the PC isn't yet nailed to the perch.

There's more life in one parrot than another, though. "My estimate is that the Windows PC market fell by 10 percent, while the Mac market grew by 15 percent", Asymco's Horace Dediu says.

52 Responses to The PC is a dead parrot