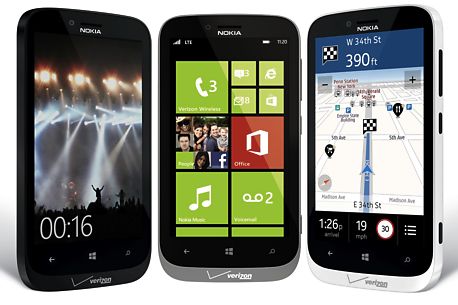 Before the public unveiling of Windows Phone 8, Nokia on Monday introduced the Lumia 822 smartphone. Sporting the latest mobile operating system from Microsoft, the Lumia 822 will be exclusively available at Verizon Wireless.

The Nokia Lumia 822 will feature 4G LTE connectivity with up to 100Mbps download and 50Mbps upload speeds. It has a 4.3-inch display with an 800 by 480 resolution, and a dual-core 1.5GHz Qualcomm Snapdragon S4 processor with 1GB of RAM. On top of the 16GB of internal storage, the Lumia 822 comes with a microSD card slot which can offer up to 64GB of extra storage. As it usually happens with high-end Nokia devices, a Carl Zeiss lens is onboard for the dual-LED 8 megapixel back-facing camera which is capable of 1080p video recording at 30 frames per second. On the front, there is a 1.2MP HD camera that can shoot 720p video.

It measures 127.8 x 68.4 x 11.2 mm and has a weight of 142 grams. Easily noticeable is the 11.2 mm thickness which is actually somewhat substantial for a smartphone these days. The rest of the specs are fairly common, with Wi-Fi 802.11 a/b/g/n; Bluetooth 3.0; NFC (Near Field Communication); microUSB port; 3.5mm headphone jack; A-GPS with Glonass support; magnetic compass, and an 1800mAh removable battery. The Finnish manufacturer quotes 10.3 hours of 2G talk time, 11.7 hours of 3G talk time and a rather impressive 62.1 hours of music playback time.

For those that think cables should be a thing of the past, the Lumia 822 comes with wireless charging. On top of Windows Phone 8, Nokia adds its usual suite of specialty applications such as Nokia City Lens, Nokia Drive, Nokia Maps and Local Scout. On the entertainment front, there are Nokia Music Store and Nokia Mix Radio, while Nokia Mail is included as part of the email solutions.

The price of the Nokia Lumia 822 starts at $99.99 on a two-year contract. There is no word yet on when it will be available, just that it is "coming soon."