The good and bad of Outlook.com, more than one year after its launch [Review] 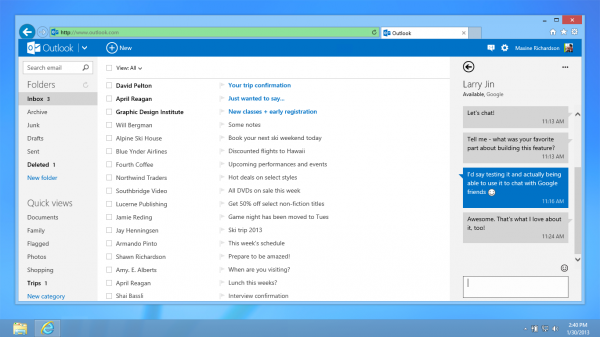 In late-July 2012, Microsoft launched Outlook.com, a new consumer-oriented email service set to replace the cluttered and dated Hotmail. Its long-term mission would be to take on Google's prevalent Gmail and establish itself as a product with widespread appeal. By grandfathering-in those who used Hotmail, Microsoft announced, in early-May 2013, Outlook.com had reached 400 million users.

I delivered my review of Outlook.com two days after its launch. My impressions were positive for a product that, at the time, was still undergoing testing (the official public launch happened in late-February 2013). Still, I concluded that the service was not up to par with Gmail, because it was missing key functionality. But lots of things have changed in the meantime, which is why I decided to write this long-term review of Outlook.com, outlining the most important changes and detailing the positives and negatives of the service, now that it has reached maturity.

Microsoft has not changed the recipe behind Outlook.com. And it did not have to. The email service still looks great and fresh inside a browser, more than a year after its launch. There is little to dislike about the interface -- my only gripe is still the extra click needed to mark emails as read. The clean and simple design remains one of the best Outlook.com features, which Microsoft should in no way try to alter significantly. Like I said, it does not have to.

The complementary services -- Calendar, People and SkyDrive -- now feature the same look as Outlook.com, which was not always the case. Some parts of the interface had the Hotmail look and feel, while others had the new one. The new design was rolled-out across the board, with all Outlook.com parts now looking like they always should have.

Microsoft took a cue from Google by allowing Outlook.com users to archive emails by pressing a single button, like on Gmail. The behavior, however, is different because the former service will actually move the selected items in a folder that the user previously chose to use for the archive (instead of changing the label like its rival does). It is a minor change, but it enhances the appeal of Outlook.com for migrating Gmail users.

Microsoft has added a number of major features and improvements to its service, including:

The Google Talk integration was meant as way of keeping in touch with acquaintances who use Gmail. Google refreshed its service with Hangouts, but this has not affected the corresponding Outlook.com functionality.

The two-factor authentication feature is not designed specifically for Outlook.com, but the functionality extends to it as the service is part of Microsoft accounts. The setup is simple, and the feature works as expected -- security codes can be received via email, SMS message, or call and can also be pulled from an app that's able to generate them.

The Skype integration was initially missing from Outlook.com, but it was an obvious addition seeing as Microsoft owns the VoIP and messaging service. The problem, and I have pointed this out as one of Microsoft's main bad practices, has been the roll-out. The integration was available in a limited number of markets from the get-go and has reached remaining ones at a slow pace. That said, most (if not all) Outlook.com users should be able to take advantage of it by now.

The improved alias management means that Outlook.com users can use any of their aliases to sign in to the service and set as primary, while being able to send emails using any of them.

The IMAP support is probably the most surprising Outlook.com addition. Microsoft's long-term preference for Exchange ActiveSync is well known, but the software giant gave in and flipped the switch on IMAP support. The benefits are obvious: third-party services can integrate with Outlook.com, users are no longer limited to the outdated POP support and emails can now be synced with the server. This is one of the best new features that Microsoft added so far.

When Microsoft released the first Outlook.com Android app I was highly disappointed by what it offered. Put simply, there was no good reason why anyone would have wanted to use it at the time. But the following major updates made the app pleasant to use and actually very useful, thanks to a number of new added features like server-side search and alias support. It unquestionably makes Outlook.com a better alternative to Gmail for Android users.

The aforementioned changes have improved the service tremendously since its launch and, as a result, I would definitely recommend it now over its arch-rival Gmail. Google's attempts to improve its service have resulted in a less pleasant user experience, which also helps tip the balance in Outlook.com's favor. Thankfully, Microsoft has yet to mimic its rival.

Truth be told, there is little to fault Outlook.com for, but there are still some issues which have yet to be addressed so far. Microsoft has told me that it is looking to improve the service and add new features, but until that happens here are the bad points about Outlook.com.

The email sorting rules have not changed much (or at all) since launch. This may be fine for those who have basic needs in this regard, but power users will be left disappointed. Even something like sorting emails based on the address of the sender and the use of a word in the title is impossible to do at the moment. A more fine-grained approach is needed.

While the Google Talk integration works well for the most part, it seems to have difficulties in picking up all Google Talk contacts; I've had to resort to some trickery to be able to talk on Outlook.com with all my friends who use the messaging service (I had to copy their Google Talk handle and add it manually to affected contacts, which is a drag since the handle is not easy to find).

Microsoft still makes it difficult for users to easily migrate aliases from one Outlook.com account to another -- there is a 30-day waiting period between removing an alias and being able to attach it to another Outlook.com account. This happens even when the two accounts share the same security information (the same user name, the same phone number for two-factor authentication and so on), which is counterintuitive.

The strangest thing about Outlook.com is that even though Microsoft firmly believes Exchange ActiveSync is superior to every other protocol, most non-mobile email apps are unable to connect to Outlook.com via Exchange. Why? Because Microsoft has yet to flip the switch on Exchange Web Services, which is an additional requirement for this to happen. Based on what the Outlook.com team told me, only Microsoft's non-mobile apps and software can connect to Outlook.com via Exchange. Every other non-mobile app has to use either IMAP or POP, which forgo syncing calendar entries and contacts.

Another issue is that adding send and receive email accounts to Outlook.com results in a less than ideal experience. To give you an idea, if you want to be able to send and receive Gmail emails through Outlook.com, Microsoft's service will only use POP to fetch them which means that delivery is not immediate (POP fetching usually happens in 15 minute intervals). Why? Because IMAP, which supports push email, is not a supported protocol for this feature. The workaround is to forward emails from the other service and set it as a send-only account through Outlook.com.

Unquestionably, Outlook.com is much better than it was in the beginning. The changes that Microsoft added since then have made the email service better in the ways that most people care about. I am using Outlook.com for my personal account, with Gmail relegated to work email exchanges and I am working towards switching entirely to the former service.

From my point of view, Outlook.com is better than Gmail is right now and it will only get easier to reel folks in if Microsoft ups the ante with frequent enhancements. Microsoft got in touch with me to ask for my Outlook.com feedback, so I took this opportunity to inform the company of said issues, bar the Google Talk problem, that I sadly forgot about at the time.

Hopefully, the announcements that follow will reveal improvements in these areas.

Have you tried Outlook.com yet? Have you switched from Gmail? What is your experience?