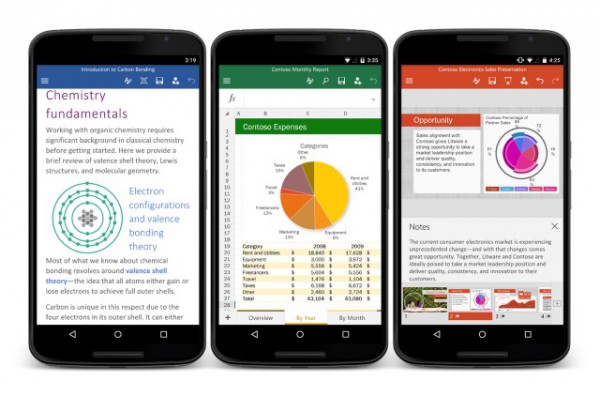 After a few weeks in preview, Microsoft Office is now available for Android smartphones. Despite Microsoft's mobile-first, cloud-first philosophy, it has actually taken some time to bring the world's most popular office suite to Android phones -- it joins the tablet version of the suite that was released last year.

Just like the tablet editions, the phone versions of Word, Excel, and PowerPoint won't cost you a penny, allowing for the viewing and editing of a range of files when on the move. There is a cloud focus with support for not only OneDrive, but also Google Drive, Dropbox, and Box, and Microsoft says it has made changes based on the feedback received during the preview period.

Unlike Windows 10, the preview of the Android smartphone version of Office was very short -- a mere five weeks. Despite this, Microsoft says that it has been able to test the suite on more than 1,900 handsets, and has been able to incorporate user suggestions.

Word, Excel, and PowerPoint can all be downloaded free of charge from Google Play. Microsoft has also put together a series of animated GIFs to serve as a quick introduction to common tasks in each of the apps, Word, Excel, PowerPoint, as well as the suite as a whole.

Check out the video for a quick introduction to the apps: