Ever since Avast took over Piriform in 2017, fans of the popular system cleaning tool CCleaner have had to put up with problem after problem, beginning -- yes beginning! -- with malware, bundled software, and pop-up ads. As if that wasn’t bad enough, CCleaner began snooping on users and Avast, for good measure, also made it impossible to quit the software.

Things have quietened down recently, but with the latest version of CCleaner it seems as if Avast is up to its old tricks again, this time bundling an unwanted, buggy web browser and changing file extensions.

Avast frequently bundles its own software with CCleaner, resulting in users who aren’t paying close attention ending up with it installing alongside the system cleaner they actually want.

The bundling of CCleaner Browser -- a Chromium-based web browser that’s currently only available in preview form (so not actually ready for release) -- was spotted by Techdows who observed that if you fail to pay close attention when installing CCleaner you not only end up with the browser but it installs itself as the default, taking over certain file extensions. 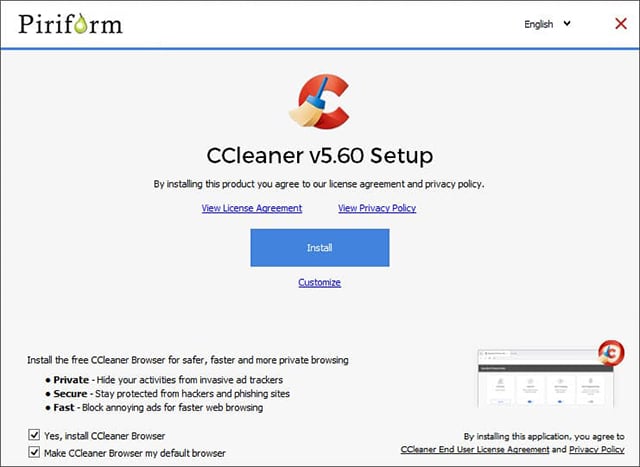 You can opt out of installing the browser and making it the default, but the checkboxes are pre-ticked, so plenty of people will miss this.

The browser takes over PDF files, changing the type to "CCleaner HTML Document" and opening the document as a web page. In addition, it prevents some installed software from working. Users have been complaining about this on the Piriform forum.

CCleaner Browser remains in preview while the developers -- in their own words -- "iron out a few little kinks", which makes you wonder why Avast thought it was a good idea to include it in the installer now.

The bundling of CCleaner Browser seems to have begun with v5.59 and continued in v5.60 which was released recently.

When I installed the latest version of CCleaner myself I wasn’t offered the browser, so it’s possible it has been pulled in light of complaints or it is only being offered in certain territories.

Should you encounter it when installing CCleaner do let us know in the comments.

If you do install it by accident, it can be removed in the same that you'd uninstall any program in Windows.