Starting today, AMD is marketing a stepped-up version of its Dragon platform's top-of-the-line processor, the Phenom II X4 model 965, for a price of $245 in 1,000-unit quantities (the "tray" price, street prices may be a little higher). The "stepped-up" part of the bargain involves a feature that just two years ago, AMD's marketing team was saying didn't really matter anymore: frequency.

It's a clear sign of AMD's renewed confidence in its own architecture that it now offers a consumer-grade desktop CPU clocked at 3.4 GHz. During those bleak days of the company's under-performing Barcelona architecture, it tried hard to play down its unwillingness to break the 3.0 GHz barrier. For a company that's famous for being very straight with its customers, these explanations of why higher performance isn't the number one item on their wants list sounded like raising the white flag, in the midst of stiff competition from Intel's Core 2.

"We hope people realize that things are a lot different this time around for us," said Adam Kozak, AMD's desktop platform marketing manager, in an interview with Betanews. "And we're not playing in the $1,000 CPU space [with Intel]...We know where we stand, and for that price/performance, you're going to be hard pressed to find a better value than us right now."

This morning, Tom's Hardware released initial benchmark results for comparison tests pitting new and previous Phenom II Black Edition processors against a selection of similarly priced CPUs from Intel, including the Core 2 Quad Q9550S and that company's forthcoming Core i7 models. The results were a mixed bag, with the 965 at factory speed outperforming the Q9550S in the synthetic PCMark Vantage trial, but with Q9550S and Core i7 920 performing better elsewhere. The street price for the Q9550S is about $350, so 965 street prices will probably come in lower, giving AMD a slight victory margin in some categories. However, that Q9550S was clocked at only 2.83 GHz.

What AMD is hoping will sway enthusiasts' opinions is a feature whose relative performance merits won't show up on Tom's benchmarks: smart profiles -- specifically, software policies capable of stepping up or down the power allotted to certain cores, based on the measured requirements of the application (or game). AMD is arguing that the perceived performance of some games may actually benefit from power being stepped down or regulated in some instances.

"What it's doing is playing to the affinities of that specific application," said Kozak. "For example, a game like Quake Wars, that game is...not going to use all four cores. It's going to use two at the most. So what [smart profiles] does is take your two fastest cores and bumps them up to give you even more performance, while the other two cores will throttle down. It's the affinity set for that specific application that'll give you the best experience possible."

Benchmarks tend not to "throttle down," or to have affinities associated with them that enable them to do so; and since Intel doesn't offer a competitive feature, that fact will likely stay the same. So AMD will still have a bit of a "Yes, but..." factor in its favor when comparisons tend not to point in their direction. What's more, AMD can claim the ability to perform better with older or more conventional single-threaded apps and games, squeezing perhaps 5% better performance by turning down the volume for cores that would generally go unutilized anyway. 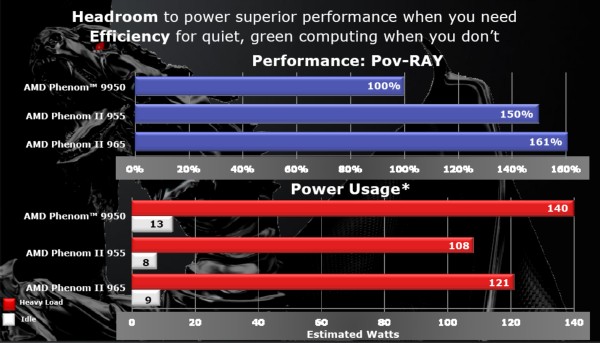 The company is also showing renewed confidence with marketing that says better performance-per-watt matters even to the enthusiast, contrasting against 2007 when the message was that power consumption only matters to Opteron buyers. AMD is now claiming that the model 965 has 11% better power efficiency than the previous 955, and an impressive 61% better efficiency than its own Phenom 9950 -- built during the short period when the company said enthusiasts don't care about power consumption.

Today, AMD also announced an interesting development in the software field: the development of a CPU/GPU performance driver specifically for Adobe Premiere Pro. Using the driver on systems with AMD CPUs and ATI GPUs, AMD claims that its capability to co-opt the GPU improves the program's video encoding and rendering time by a factor of seven.