In November, Apple burst into the Top 10 U.S. parent Websites, as measured by number of visitors. Nielsen released the data earlier today. Apple has been in the list of Top 10 Web brands for some time, but its appearance in the "Top 10 Parent Companies/Divisions" is unusual.

What that means for Apple: "The data indicates that 62.1 million home and work Internet users visited at least one of the Apple Computer-owned sites or launched an Apple Computer-owned application during the month, and each person spent, on average, a total of 1 hour, 18 minutes and 23 seconds at one or more of their sites or applications." By comparison, Google had 155.5 million unique visitors in November.

Nielsen doesn't reveal where the traffic comes from, but Mac sales are strong right now and an obvious source to consider. Today, two Wall Street analysts, J.P. Morgan's Mark Moskowitz and Piper Jaffray's Gene Munster, estimated that fourth calendar quarter Mac sales would be between 2.9 million and 3.29 million units, which is above consensus shipments. Apple shipped more than 3 million Macs in third calendar quarter. New Macs ship with the Safari Web browser, which is set to a start page off of Apple.com. More Macs mean more Apple parent level traffic, from consumers that don't change the defaults. Then there is iPhone/iPod/App Store to consider and fee service MobileMe, for driving traffic to Apple parent sites.

Other data of interest from Nielsen about U.S. Internet users in November:

Number of unique visitors is valuable, but time spent online is a more important measure of any Web properties' or brands' success -- and it's one often overlooked by blogs or news reports emphasizing search share, where Google is the global leader. People coming and staying for hours is potentially more valuable to online advertisers than Internet users who click in and click out, which too often is the only measurable value of pageviews. Time spent online at a site is one way to measure sustainable audience. 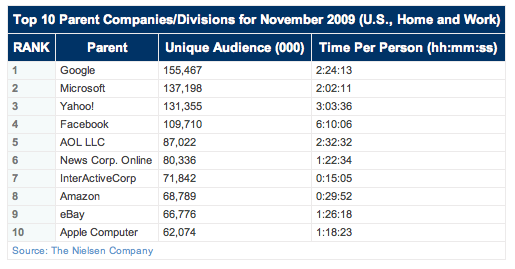 There, Facebook is simply a giant. In November, Facebook only ranked fourth for unique audience with110,000 Internet visitors, but topped other sites for time spent on line -- by a substantial margin. According to Nielsen, U.S. Internet users each spent an average 6 hours 10 minutes and 6 seconds on Facebook in November -- that's up from 5 hours 24 minutes and 38 seconds in September. U.S. Internet users spent less than half as much time at second-ranked Yahoo: 3 hours 3 minutes and 36 seconds.

Yahoo's time spent online shows how valuable the company remains, despite the Microsoft takeover turmoil of 2008 and layoffs and reorganization this year. Yahoo still commands great brand strength and users' time online at services like Flickr and Yahoo Mail.

For time spent online, Apple ranked 8, only about 4 minutes behind News Corp., which owns declining social network MySpace. Apple's time-online ranking shows where there is untapped potential. Apple doesn't have a social networking service like Facebook or MySpace or search engine and attached properties like Google, Microsoft or Yahoo. Meaning: Apple's number of unique visitors and time they spend online could be much higher with the right connected suite of services.

But Apple, like most of the other parent sites in Nielsen's Top 10, sends traffic to Facebook. One Apple example: iPhoto upload to Facebook. Long term, is it really in these major Website's best interests to drive up Facebook's unique visitors and the time they spend online there? Facebook support may ultimately be self-defeating, as Apple and other major Web properties give up more than they gain.