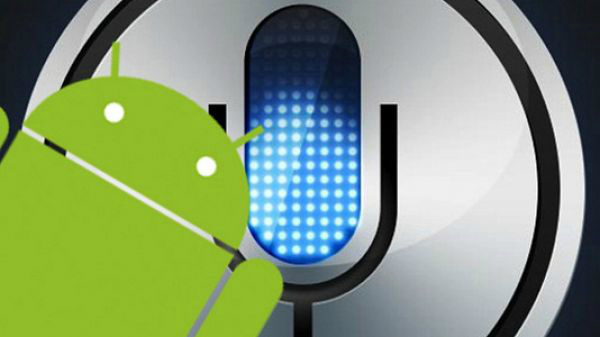 A week has passed since I started up my Google I/O-issue Galaxy Nexus and updated to Android 4.1 (aka Jelly Bean). Since then, my daughter and I faced off Google's Voice Assistant against Siri (on her iPhone 4S). The results aren't surprising. Google's depth as a search provider proves its wherewithal against Apple, which calls Siri a personal assistant. But Jelly Bean's feature, used alongside Google Now, is every bit more and every bit what a digital assistant should be. Siri sucks even more, by comparison.

I will be absolutely clear: Together, Voice Assistant and Google Now represent a watershed development, living up to what Apple promises with Siri. Google has successfully presented its depth of search in a truly meaningful manner -- one that can change how people interact with mobile devices. If execution improves over time, particularly as Google Now learns personal habits, these innovations could be as important to the search giant as the development of its algorithm.

But there's a strange twist here. Google removed important search functionality from Android 4.1 in response to US Patent 8,086,604, which Apple successfully used to gain preliminary injunctions against Samsung Galaxy Tab 10.1 and Galaxy Nexus. Disparate app search remains, but not the universal search bar for the entire device. Sean Kalinich, writing for Decrypted Tech, does an outstanding job showing that Google brought to market similar capabilities on PCs, and received patents for them, nearly seven years before Apple got its patent in late 2011.

Jelly Bean loses as much as it gains, making personal assistant capabilities much less than they should be. For now. Voice or text search in relationship of anything to anything (like contacts and interactions with them) on the phone is limited to non-existent. Google doesn't -- and probably won't until Apple's broad patent is overturned -- tie together things like it does on earlier Android versions. From that perspective, iOS 5 search and Siri are better, because Jelly Bean can't be. Apple patent bullying is to blame.

Something else, and this is hugely important: I find voice recognition capabilities on Jelly Bean to be inferior to predecessor Ice Cream Sandwich. Perhaps it's just an issue with my device. But on my Galaxy Nexus running Android 4.0.4, voice recognition is nearly 100-percent accurate. On Android 4.1, there are lots of misses, which probably seem more than they are because the other is just so damn good. I wonder if this dumbing down also responds to Apple patents.

Voice Assistant and Google Now are disparate yet united features. To anyone who has used Siri, Voice Assistant will feel familiar. You ask a question, and a female voice responds and displays a response on screen. Apple Fan Clubbers will accuse Google of copying. Tell that to science fiction writers from early last century or look no further back than 1966, when "Star Trek" brought a female voice response to computers. The idea isn't new, and Apple bought Siri anyway. What Google brings that Apple can't is depth of information, and I'll explain how in the next section.

Google Now is a different beast altogether, and you must opt-in to use it. Most people probably have an inkling that Google tracks, or at least can, their activities. Google Now shows just how much and how useful it can be. The feature follows some of your activities and uses them to provide information before you ask.

Sometimes from hardship comes real inspiration. Apple's patent bullying takes something away, so Google goes around it. You don't have to search. Jelly Bean knows what you want before asking. Google Now is for now limited to things like places, travel and appointments, but it's real power is what comes next -- when Google can truly include people and your interactions with them.

Google Now presents information in "cards" and in Android's drop-down Notifications menu. Is there an accident on your daily commute? Google Now will tell you. "Will it rain today?" is a question Apple uses to promote Siri. You don't ask Jelly Bean, it tells you (okay displays in Notifications the weather forecast).

Google Now is clearly a work in process. There's more the search giant will add, and you, too. Keep in mind, Google Now is bigger than Jelly Bean and taps into your activities using other Google products and services, such as Chrome, to build up a database of information important to you.

Apple Fan Clubbers will claim that Apple brought personal assistant voice search to phones first. Hardly. Google made the capability meaningful with Nexus One's release in January 2010. I've conducted numerous tests comparing Android to Siri, and Apple's tech lost every time (even if you read the text the one time the headline claims otherwise). What's different now: Voice Assistant brings female voice response and pretty presentation to visual responses. Android's responses are still more accurate, and they are way, way more meaningful. Apple is out of its depth, because Google has so much of it.

My daughter asks her iPhone 4S for "directions to Sea World"; I ask Galaxy Nexus. The screenshots speak for themselves. 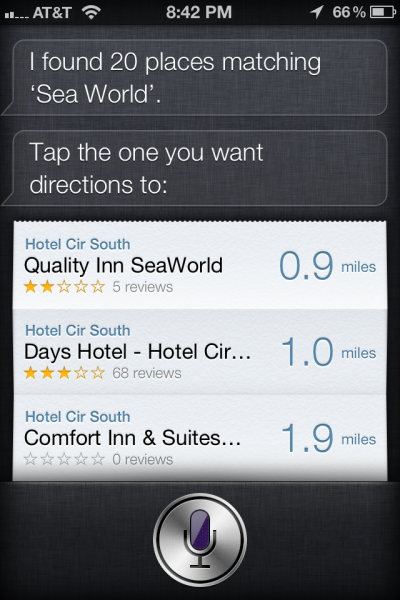 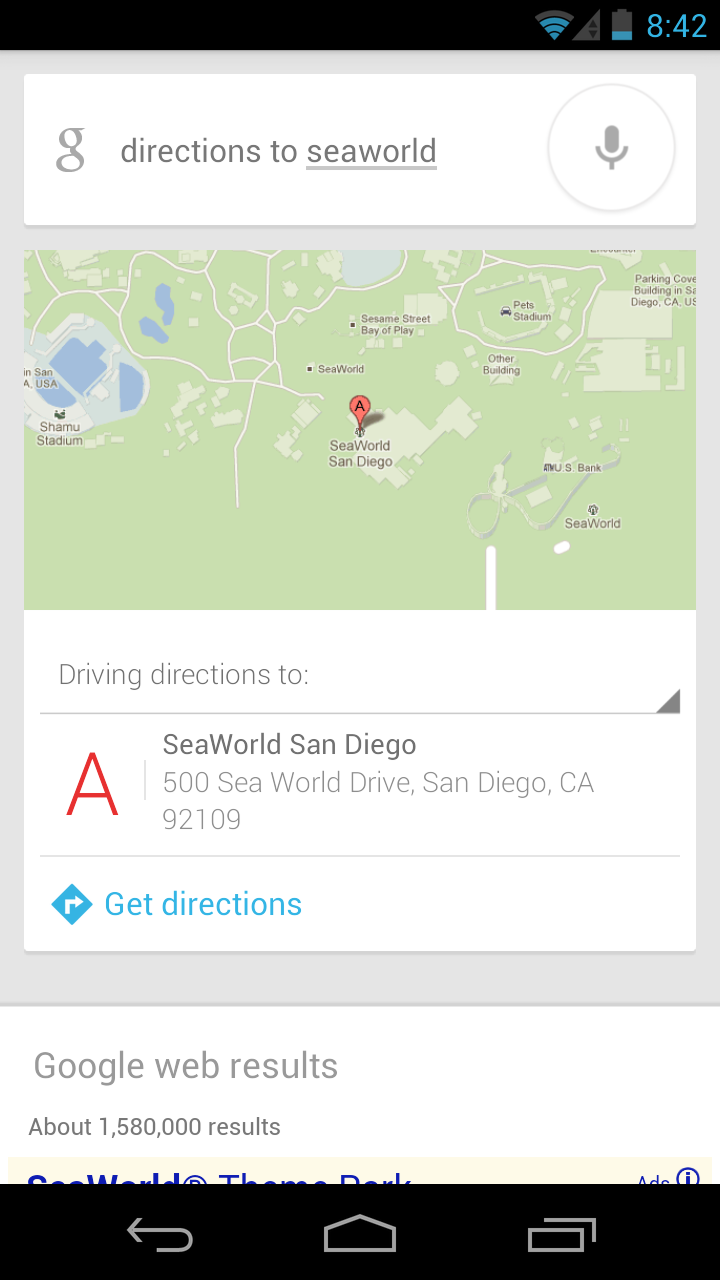 As is typical of Siri, results favor the marketing of something. Jelly Bean briefly displays the card then presents a map with driving directions (sorry, you don't need to see my apartment on a map).

We both ask: "Where's the nearest Pizza Hut?" 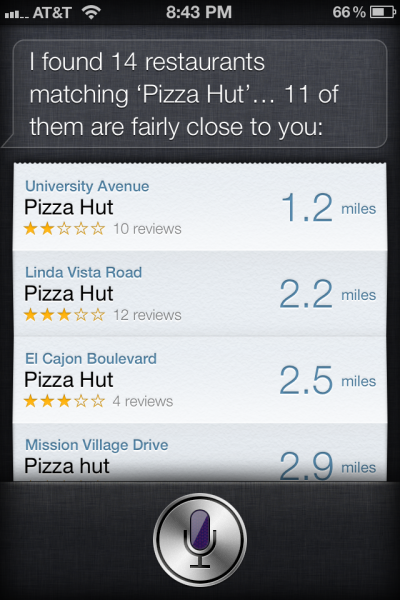 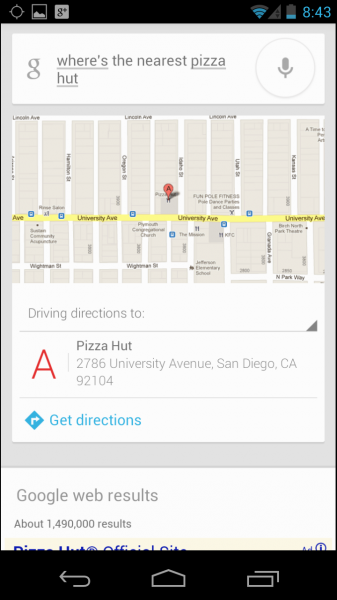 Once again, there's no comparison between the usefulness of answers -- and Google leverages its depth doing maps, a functionality Apple removes in iOS 6 in favor of its own homegrown solution.

We next try a common problem, regarding cats. 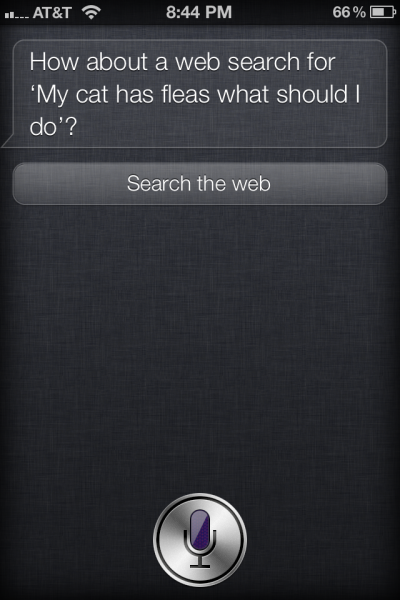 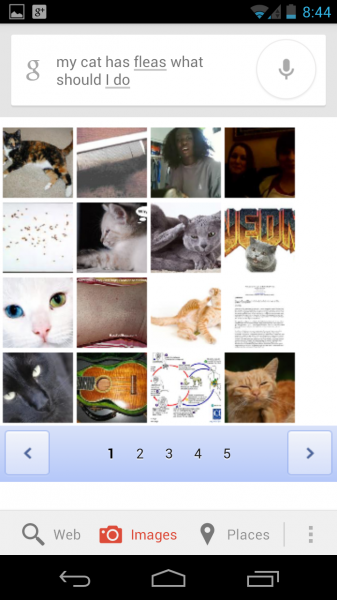 Siri asks about doing a web search, Voice Assistant presents a search page. But this screenshot shows what comes next. Siri lets you be with the search page, while Jelly Bean presents other ways of filtering information, in this case images.

We both then ask: "How do you make yogurt". Siri offers to search again, while Jelly Bean presents another search page. But below the results, Google presents options to search images, videos, blogs, discussions, books and more. 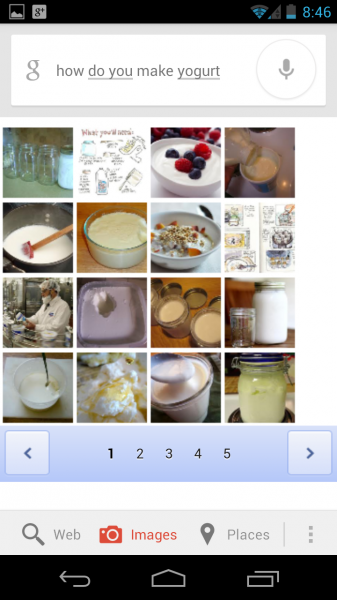 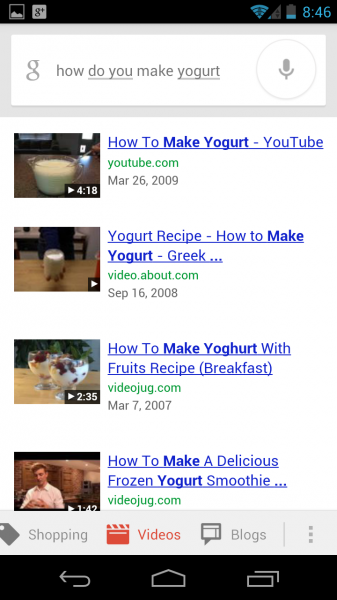 This query was my first Internet search ever in 1994, using Gopher. My wife wanted to know how, and I found a recipe in a Czech university's database. It was absolutely the coolest thing then. Now, that kind of search is archaic. Watching one of a zillion YouTube videos is so much better, and I can find it so much easier using Galaxy Nexus than iPhone 4S.

Out of fairness, and to show the difference in presentation, I'll show one that Siri actually got right. In my testing, Voice Assistant's worst performance was same as Siri. This example is no exception. We ask the population of my hometown. 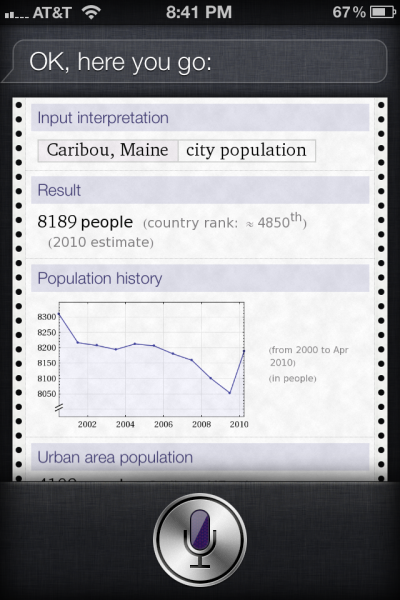 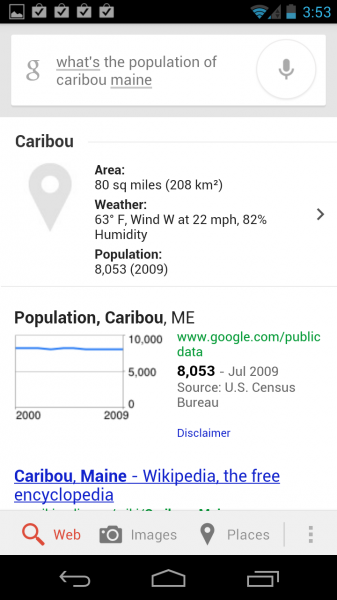 I could go on, but you get the point. Right?

Editor's Note: We don't know the source of the top image, so we can't properly credit it. If you know, please tell us.