Three out of four smartphones ship with Android 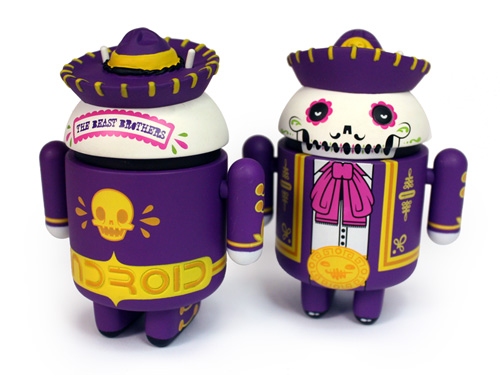 Android's ascension over iPhone reached the figurative stratosphere during third quarter, according to IDC. Seventy-five percent of smartphones shipped with the operating system -- that's up from 57.5 percent a year earlier. By comparison, iOS nudged up to 14.9 percent, from 13.8 percent. That's right, little more than 1 percent. There's a reason that in September I asserted "Android wins the smartphone wars". There's certain appropriateness to IDC releasing the data on Day of the Dead.

Out of fairness to Apple, iPhone unit volumes rose considerably more, 57.3 percent, than market share reflects -- 26.9 million units compared to 17.1 million a year earlier. Android shipments rose 91.5 percent; 136 million, compared to 71 million in Q3 2011. Still, Android volumes in the quarter exceeded that for all smartphones in 2007. My how the market has changed.

Android's success is nothing short of phenomenal. Shipments reached 700,000 in 2008, for 0.5 percent market share, according to IDC. Google and T-Mobile launched the first Android phone, the G1, in late September of that year. Android share reached 4 percent in 2009, with 7 million unit shipments, lifted by Verizon's Droid line and $100 million marketing campaign behind it. The following year: 71.1 million, for 23.3 percent share. In 2011, 243.4 million Android smartphones shipped, for 49.2 percent share. So far this year, the number is 333.6 million, for 68.2 percent share.

"Android has been one of the primary growth engines of the smartphone market since it was launched in 2008", Ramon Llamas, IDC research manager, says. Stop and ponder that statement, which rings counter to the American tech blog and news media obsession with iPhone as the industry mover.

"In every year since then, Android has effectively outpaced the market and taken market share from the competition", Llamas explains. "In addition, the combination of smartphone vendors, mobile operators, and end-users who have embraced Android has driven shipment volumes higher. Even today, more vendors are introducing their first Android-powered smartphones to market".

In October 2009, I explained why "Apple cannot win the smartphone wars". The Apple Fan Club of analysts, bloggers, reporter and other writers sharply criticized the analysis. As I explained three years ago, iPhone is to Android like Macintosh was to DOS/Windows PCs: "Another everyone else against Apple battle is coming, with Android looking to be the better OS around which an ecosystem grows and thrives. There's a Star Wars metaphor here somewhere. Apple lost out to DOS/Windows because of the attack of the PC clones. Now the droids are coming for iPhone". 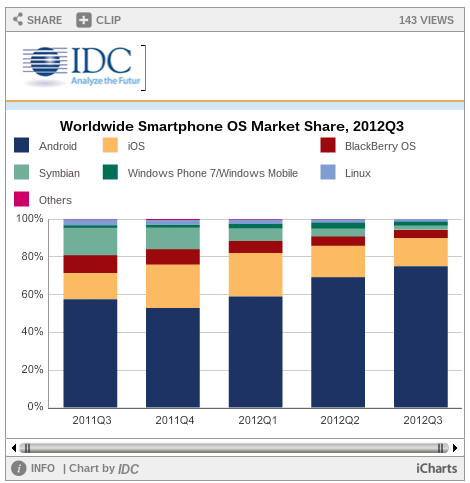 This summer, cumulative Android device shipments reached 500 million, passing iOS. Looking ahead, IHS iSuppli predicts that cumulative Android smartphone shipments will reach 1 billion next year, but iOS not until 2015. The war is over, and Android won. Daily Android activations now total 1.3 million, up from 900,000 in June, according to Google. At that run rate, Android device sales, based on activations, work out to 117 million every 90 days. Reconciling with IDC's data, actual sales are brisk. The analyst firm measures shipments into the channel not sales out to end users. Adjusting for tablet activations, sell-through approaches 85 percent.

Fourth quarter promises to be another big one for Android, even with iPhone 5 storming the global market. Some of the most-highly anticipated handsets go on sale, including Nexus 4, unsubsidized and unlocked from Google on November 13 and subsidized from T-Mobile USA a day later. Carphone Warehouse and O2 will carry the phone in United Kingdom.

Shipments are only one measure of success. Apple still presents a more attractive applications development platform, because it's more unified. About a month after iOS 6 released, 200 million devices, or about half, run the operating system. Based on data Google released last month, only 1.8 percent of Android devices run newest version 4.1, which released in July. Android 4.2 is expected imminently.

Still, Android and iOS have now reached applications parity, about 700,000 in their respective stores, although desirable selection matters more than actual number. But the big number, 75 percent, is most compelling. The more people using a platform, the greater number of apps developers can sell (and make money), and as choices improve so does overall desirability to consumers.

For now iPhone's second-place ranking is secure. BlackBerry and Symbian shipment share fell 34.7 percent and 77.3 percent, respectively. Windows Mobile/Phone rose a stunning 140 percent, but from tiny base -- 3.6 million units, up from 1.5 million a year earlier. For perspective on Microsoft's challenge, Android and iOS combined share is 89.9 percent.

27 Responses to Three out of four smartphones ship with Android