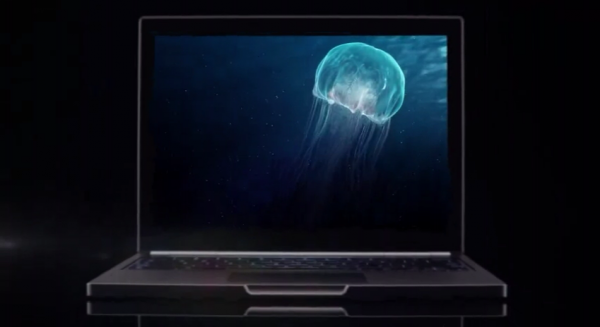 Today's buzz among Chromebook aficionados and wannabes is a leaked video for a model supposedly being developed by Google with high resolution, touchscreen display -- that's 2560 x 1700, baby. The vid went up on YouTube, then mysteriously came down, but went back up virally, adding to the intrigue that maybe, just maybe, the touchy-feely Chromebook is real. In your dreams.

Who doesn't love a good mystery, particularly gadget freaks desperate for something more and bloggers clawing over one another for greater pageviews. Conspiracy is an Internet meme that never grows old. But there's something oh-so wrong with the Chromebook Pixel shown in the video. Doesn't the computer look a whole lot like Apple MacBook Pro? Similarities are striking, which makes me wonder whether Google imitates art or this video isn't for a real product. Perhaps it's just pitch for one.

For sure, a Google-designed Chromebook would be timely. Just two days ago I griped about OEMs releasing new models based on existing Windows machines stripped to the bones. Manufacturers need a good swift kick in the ass, and Google should start by doing what it did with smartphones and tablets: Co-develop reference designs that run stock software -- hence the Nexus line of smartphones.

So, yeah, Google leadership is needed so the Chromebook wave rises rather than falls off once the geek market loses the "next big thing" glow.

But pardon my skepticism Chromebook Pixel is for real, given the paucity of rumors that turn into reality and the marked MacBook Pro resemblance. Look at the video! It's stylized like a MacBook Pro commercial minus Jeff Goldblum narration. Isn't that reason enough to wonder about this thing?

Chrome OS has had the nuts and bolts for touch support since the CR-48, and when you consider the resolution in the Samsung Nexus 10 it seems plausible that Google would look in this direction for Chrome OS at some point.

This video, though? This video has all markers for an intentional viral prank. For starters, it's a crappy render of a crappy laptop. Next, it's using the wrong Google logo at the end. Finally, the video was pulled from YouTube, and then pops back up on DailyMotion courtesy of an Android blog.

Another tell is "Chrome" without the logo 43 seconds into the video. Still, if you closely examine describable keys, they are right for Chromebook.

Developer François Beaufort, who ignited fierce fires of hope across Google+ today, calls Pixel a "concept" being "actually tested at Google right now". But concept doesn't mean real product, certainly not looking this much like an Apple laptop -- or are Google lawyers that audacious? Besides, companies test all kinds of prototypes and produce marketing mockups during the development process.

The collective Chromebook community is near fatal heart attack over this thing. I have visions of screaming teenage girls, some with arm outstretched, waiting for the Beatles. "Wow, I think I just found my next laptop", Andrew Brown chimes.

Jeff Jarvis: "I want one. Now that Google has done a good job testing the low-cost end of the market with its Chromebooks, now it needs to test the sleek end".

"Shut up and take my money!" Lee Grupsmith exclaims.

Oh, you screaming school girls! Aren't we all?

13 Responses to Chromebook Pixel looks like MacBook Pro to me