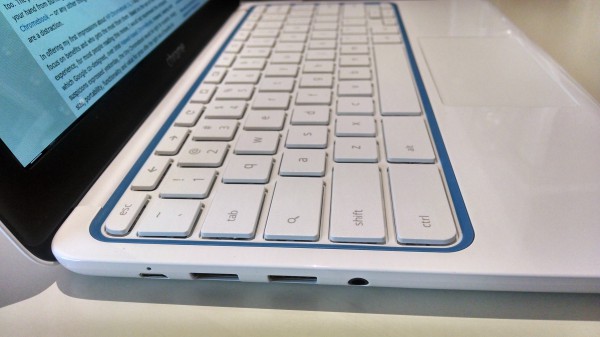 Today Mihaita Bamburic bids "Goodbye, Windows XP!" Meanwhile, Wayne Williams walks down eXPerience memory lane. For good reason: This week, Microsoft pulls the life support plug -- following many, many, many delays. Henceforth, you use XP at your own risk, or forcibly march forward into the second decade of the 21st Century. You could follow Microsoft to Windows 8.1, or be truly courageous. Mac or Linux laptop are options, or you could go Chromebook. Yeah, you read right.

Here in the United States, Best Buy will trade in your XP clunker and give "minimum of $100 toward the purchase of a new Windows computer, Apple computer or Chromebook". The offer ends April 19, so hurry. The cash back will practically pay for a new Chromebook, which costs so little and does so much -- surely more than your XP wheezer. Someone from the Windows division once told me that O2, as in Oxygen, was one of the runner-up names for XP. How fitting. Your old machine has been living off oxygen for far too long. Pull the plug. I'll give you some reasons why Chromebook.

I started using Chromebook back in December 2010 -- not nearly the dark ages of computing where XP users live but still ancient history (PC industry ages dog years x 3, conservatively). I use Chromebook as my primary (actually only) PC. So I know something about the benefits.

1. Chromebook is familiar. You live in the browser, right? Who doesn't? On Windows XP that means Chrome or Firefox, since newer Internet Explorer versions no longer support the operating system. With regards to computing's future in the cloud, Microsoft left you behind during the last decade. If Google's browser is your IE replacement, then you are completely familiar with the Chromebook user interface. Heck, putting on new shoes couldn't be easier. Chrome is worn-in and ready.

2. Setup is easy. Chrome syncs bookmarks, passwords, settings, and web apps across devices. If your data is stored on the XP PC's hard disk, you will want to move it to an external HD or to Google Drive. New Chromebooks come with 100GB free Google Drive storage for two years. If you use Chrome and store stuff in Google Drive, setup takes a minute or two, depending on how fast you type and Internet connection throughput. That's right, to set up the laptop you log into your Google Account. April Fools is passed. I don't joke. It's that easy.

3. Performance is better. Chromebook critics claim that the ARM or Intel Celeron processor and limited storage (typically 16GB) are insufficient for a good computing experience. Stated differently: A $200 or $300 laptop just can't be good enough. Oh, but it can be, particularly if moving from a XP clunker. I moved from a Mac laptop to Chromebook, which is more demanding comparison, and the Google satisfies as much as the Apple and in some ways more.

4. You get most, if not all, of the apps you need. Microsoft argues in product marketing that Chromebook can't run all the apps that Windows does. There's something to that contention if you must have Office, and there certainly is capable software available for Windows 8.1 that you can't use on Chromebook -- but most of it not on XP as well. You already chose to limit application options by sticking with Windows XP. Take a look at the Chrome Web Store and you will find that most app categories are adequately filled. For free.

5. Google supports your legacy stuff. Still, if you must access Windows apps, Chrome Remote Desktop gets into the traditional PC to do just that -- also demonstrating just how much Chromebook provides plenty performance for most of your needs.

I could go on highlighting other benefits -- like no need to run anti-malware or fantastic keyboards -- but these five capture some of the best benefits.

So maybe, you're thinking about a Chromebook. Which one? I make some suggestions based on past reviews or those underway. The newest models, with "Haswell" processors, offer fantastic battery life, typically 7 hours or more.

Acer C720. You will be pressed to find any laptop that offers so much for so little money spent. The Chromebook has a clicky keyboard and looks of cheap plastic but packs performance punch beneath the exterior. But design is relative. If you are moving up from a XP beige box, the C720 is all improvement.

Acer C720P. I am currently reviewing this laptop and will post soon. The C720P is by far my least favorite Chromebook but still worthy. The big benefits are the touchscreen and long battery life. If you want touch, this is the laptop to buy -- not just Chromebook.

Google Chromebook Pixel. The Lamborghini of Chromebooks is exceptional in just about every way but battery life, which newer models with Haswell processors deliver better. I love the Pixel, but most XP migrators should consider something like Microsoft Surface Pro if spending this much.

HP Chromebook 11. Google codesigned the Chromebook, which is attractive, sturdy, and offers a screen that's best of class. The laptop runs a Samsung ARM processor, which means fanless operation but sacrifices some performance compared to Intel models. HP also skimps by giving just 2GB of memory. If performance was just a little better, this would be my favorite Chromebook. Coming from XP, you should be satisfied.

HP Chromebook 14. I am reviewing this Chromebook now and like it much more than anticipated. I started with negative attitudes about the 1366 x 768 resolution on a 14-inch display but find it surprisingly suitable. The screen surely is better than your XP clunker.

Samsung Chromebook 2. Samsung refuses to send me one for review, which disappoints since this model promises so much. I previously reviewed the Samsung Series 5 and Series 550. So I will limit to specs, not having touched the laptop. There are two models, and higher screen resolution puts the larger laptop into a class of its own among Chromebooks.

I limit to the Chromebooks for which I am familiar. Best Buy carries 25 configurations, for example, and not all manufacturers. Among those MIA: Dell and Lenovo, which both offer Chromebooks.