I sold my MacBook Pro and bought a Chromebook 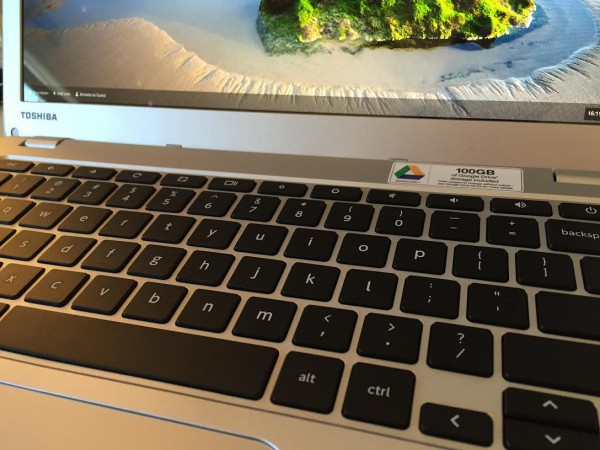 The proceeds go to buying Toshiba Chromebook 2 (two, another for my wife) and Android phone for her. She moves from iPad Air, which has been, since September 2014, her PC—and that experience should be another story (be patient). If time travel was possible, I would keep, rather than sell, my Chromebook Pixel early last summer. The Chromie lifestyle suits me best, and I am excited to be back to it. However, in December, when reviewing the tech products that changed my digital lifestyle last year, including the switch to Apple's platforms: "I can’t imagine using anything else". I lied to myself, and unintentionally to you.

Health matters prompted my Google-lifestyle exodus. I use bifocals now and wanted reduce eye-strain. Microsoft offers the best font-rendering technology on flat screens, and I decided to switch platforms in early summer. I saw in Nokia Lumia Icon and Surface Pro 3 opportunity to improve my impaired work-writing situation and to reconnect with the Windows platform and my core audience of Microsoft users.

But Windows 8.1 and I were an ill-suited match. I enjoyed Modern UI but not that the most-necessary applications required the older desktop motif. Then there was the litany of glitches that interrupted workflow and creativity. At the end of August 2014, I sold the Microsoft tablet to a father, for his son entering college; my sister bought the Icon. I used the proceeds to add MacBook Pro and iPhone 6 to iPad Air and an Apple lifestyle.

I had hoped to expand my content repertoire to include podcasts alongside writing, and I had good past experiences using iPhone to capture audio and video and a Mac to produce content. But over the nearly four-following months, I discovered that:

In late August, when giving up Windows, I considered replacing Chromebook Pixel. But I couldn't find one within my budget. I didn't see enough value spending $1,449 on the new model. No other Chromebook provided sharp enough, or bright enough, display for my reading and writing enjoyment. Except: The Toshiba model I type on now. Had my decision to leave Microsoft products come a few weeks later, Chromebook 2 would have appeared as the option it is today. HD, IPS display sets the Toshiba apart from other Chrome OS notebooks.

I bought the laptop from Amazon last week, after seeing the Toshiba in Best Buy, which was out of stock. Performance isn't as smooth as the MacBook Pro, yet I am more productive. Reasons are many, with less distraction being among them. Chromebook keeps your fingers largely in the same plane and the eyes, too, but in more elevated spacial relation. Because you work with tabs at the top of the screen, your eyes generally look up, rather than down or across—depending on where is the OS X dock. The UI's simplicity minimizes distraction and interruption that, at least for me, disrupts and even destroys creative flow.

I used Toshiba Chromebook 2 for three days, before deciding that I could give up the MacBook Pro. But the decision-process wasn't that simple. Ten days ago, I received Google Nexus 9 for review. My expectations were low, having read numerous meh reviews about the tablet. My user experience is altogether different, however. I really enjoy the device and Android 5 Lollipop. Damn, if it isn't sweet.

While iOS apps are more mature, and the experience reading digital publications is more immersive, I found myself picking up Nexus 9 instead of iPad Air. I will explain all the reasons why in my eventual review. Short answer for today: Google apps integration and information utility. Nexus 9 is the catalyst causing me to reconsider Chromebook. Had I been as satisfied as expected with my renewed Apple lifestyle, a switch would have been a passing fancy.

In purchasing Toshiba Chromebook 2, I expected to try and return for refund. But two days using the laptop had me looking at going Google. Underpowered by comparison means nothing. A product's measure isn't the features but the benefits you receive. That said, the phone is the most-important device in my digital lexicon, and iPhone 6 and Chromebook just don't fit well.

I considered Moto X Pure Edition and Nexus 6, but PE isn't available on Verizon, and N6 is sold out at Google Play and at Motorola (today). My phone choices, and monthly costs, would be considerably better with another carrier. But GSM service sucks in our neighborhood, while Verizon delivers consistently. With a 93 year-old father-in-law living independently, reliability is a necessity.

On Saturday night (January 17), I drove down to the local AT&T store, which had Moto X and Nexus 6 on display. Expecting to find N6 to be too large, the handset is just right. I made decision then, to keep the Chromebook, sell the Mac, and eventually replace iPhone 6 with Nexus 6. I could have purchased the 32GB N6 in Midnight Blue from Motorola over the weekend but I held out for the 64GB model. Now, like at Google Play, N6 is sold out. Ah, shucks.

My wife and I discussed the switch, and she expressed interest to join me. Much as Anne enjoys iPad Air, she confessed to preferring Chromebook. "What about iPhone?" I asked. She would part with it, too, and that surprised me. She missed Android as well, turns out. Go figure. She's an artist by nature and designer by profession, which I stereotype as Apple user.

So yesterday, I hauled down to Best Buy, which had Toshiba Chromebook 2 back in stock, and bought another—after Craiglisting the MacBook Pro. Verizon Wireless store is nearby, so I moseyed in to look at Moto X for my wife. The rep made surprising offer. For some cash up front, the store would trade in the iPhone 6 for the Droid Turbo, put Anne on the Edge plan, but credit the monthly fee plus a penny. Because no cell phone lines were eligible for upgrade, I had planned to sell the Apple handset and convert that to cash to pay full price for an Android. The deal Verizon offered wasn't as good, but it would be less hassle and from my cash-out-of-pocket perspective about the same.

My wife liked the idea, so I drove home, factory-reset her smartphone, and returned to the Verizon store. Meanwhile, I emailed or texted with several potential MacBook Pro buyers. One had cash in hand, from Friday for another Apple laptop purchase that fell through. But he needed to meet by 3, because of other obligations, and I hadn't prepped the computer for sale. It was 1:40 at the Verizon store.

The clerk brought out a box with the Droid, started to ring up the sale, then apologized for fetching the wrong phone. I hurried him along, explaining why. "You got a discount", he said, when the price came up about $20 less than expected. "Does it say why?" I asked. No. If I hadn't been rushed, the implication would have been obvious.

At home, the color of the phone's back was more rust than the bright red I remembered seeing. I figured the difference was the store lighting. After showing the handset to my wife, but asking her to wait for me to set up her accounts before using it, I rushed off to prep and sell the MacBook Pro.

Home again, I set up her accounts, installed apps, and had her choose ringtone. Then in settings I looked for the HD voice feature, which wasn't there. Mmm, I sure recalled seeing the setting on the store's display model. Finally, before handing her the Droid, I checked, more out of curiosity, to see how much of the 32GB of storage remained. But the stated capacity was 16GB.

He sold me the wrong phone! The older Droid Turbo Maxx! I would later discover at the store when seeing the different-size product boxes , the rep had brought out the right Droid the first time. I was really pissed but put on my polite persona, which smoothed any other problems. Verizon swapped out the phone, didn't charge for the difference between the handsets, and permanently reduced my monthly bill by $10.

Twelve hours later, my wife is satisfied with her new Android and laptop. "I'll get right back into the flow of the Chromebook", Anne says. "There's no doubt about it. It's not that hard". Simplicity is the point.

As for me, I would buy Chromebook Pixel, if one was priced right (unlikely) and return the Toshiba model for refund. I wait to replace iPhone 6 with Nexus 6, but that's not likely happening soon. I can't buy what's sold out from Google Play or Motorola and which Verizon doesn't yet sell.

But for today, and this story, the Chromebook 2 is utility enough and satisfies more than the pricey Mac.