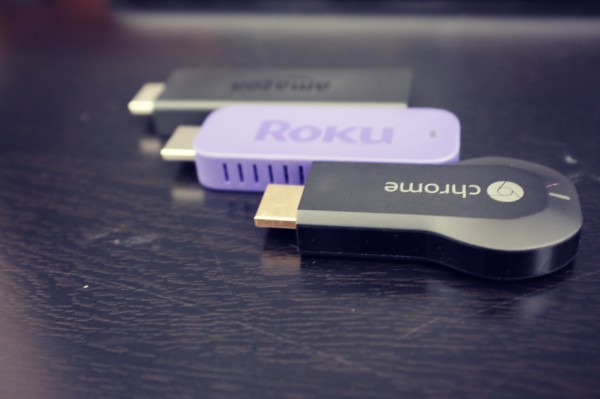 My household cut the cord in July 2014; the cable box is gone. In the process, I have been testing various streaming set-tops and sticks, and the latter is today's topic. Google opened up the category with $35 Chromecast in July 2013, and the device gets better with age. Roku Streaming Stick, at $49.99, is priciest choice, while Amazon Fire TV Stick is the $39 in-betweener.

Briefly, before deep diving, Chromecast is easiest to use and offers more commercial programming support. Roku delivers broadest streaming channel selection. Fire TV fits tightly into the broader Amazon Prime ecosystem, while offering satisfying, but incomplete, content options compared to either of the other devices.

None of the three streamers is good enough for everybody, which is reminder that the benefits you receive matter more than features the device manufacturer promises. I will lay out key benefits, which you can compare when making your buying decision. For my current setup, only one of the three devices is an option, and that's warning to look before you buy. While our Vizio M322i-B1 television has three HDMI ports, the two round back will not fit streaming sticks; only the side slot does. Check your tellie, too.

The Wilcox household cancelled AT&T U-verse service last summer, switching to Cox Internet for $59.99 per month. The new provider promised 50Mbps service but doubled bandwidth in late October. However, in speed tests, I more typically see better—120Mbps downstream over WiFi. For us, cord-cutting means watching no live TV, even over antenna (more because of reception problems in our apartment). We stream everything from services like Amazon, Hulu Plus, Netflix, and YouTube, among others.

Earlier this month, we finally accepted Cox's offer to add more, with service called Flex Watch. For another $19.99 monthly, the cable company offers local TV channels from HD box plus Encore, HBO, and Starz for one year without contract. However, we put into storage, rather than connect, the set-top box for two reasons:

Of course, streaming sticks can, and should, be used by anyone. Cord-cutting isn't required. But I frame them in the context in which I tested. Now let's get to the devices.

Google's stick is the granddaddy, and today's hardware is essentially the same as that which released about 20 months ago. Chromecast improvements come from updates to App, OS, and supporting services. Your device running Android, Chrome, or iOS is the remote where you access and "cast" content.

If you don't mind, even find beneficial, using phablet, smartphone, or tablet as remote, Chromecast is excellent choice. If you would rather use separate remote, the stick may not be for you. I prefer Android device in the remote role. It's convenient if, say, an interesting YouTube shows up on my social feed to cast from Chrome to the TV. My wife enjoys the cat vids.

However, the other two sticks support casting from YouTube and from some other sources. The benefit isn't just limited to the Google device. But the number of Cast-ready apps is considerably longer. Most of the sources I would want are supported, and they include all the premium movie channels that I'm authorized to stream by way of the Cox sub.

The other sticks can stream from HBO Go and Showtime Anytime but not the Encore or Starz networks. Where Chromecast comes up short: Amazon Instant Video. If you can only use one streaming stick and consume content from Amazon, Chromecast isn't the best choice.

Like the other two sticks, Chromecast plugs directly into the HDMI port and comes with choice of USB cable connected to the TV or electrical charger to provide power.

Overall device performance is excellent, and I would rate it to be subjectively superior to either of the two other sticks.

By contrast, I find the Roku device to be annoyingly slow; perception that is accentuated by my having used the company's set-top model, which is quite zippy. I recommend looking for a deal on Roku 2 or, better, 3 before buying the stick.

With Chromecast, your content comes from supporting apps installed on the devices acting as remotes. Roku requires you to add channels, which is fairly easy but nevertheless is another step (or more for subscription content). The lineup is fairly comprehensive and is similar to that available for the other two sticks.

However, my device drops frames when streaming, or some channels will crash. By contrast, Roku 3 is considerably more reliable, as are Chromecast and Fire TV Stick.

Tip: The Roku starts slow. When my TV is powered down, the stick gets no juice, which means long wait for bootup every time I turn on the TV. If your tellie operates similarly, plug Roku into the wall charger instead. 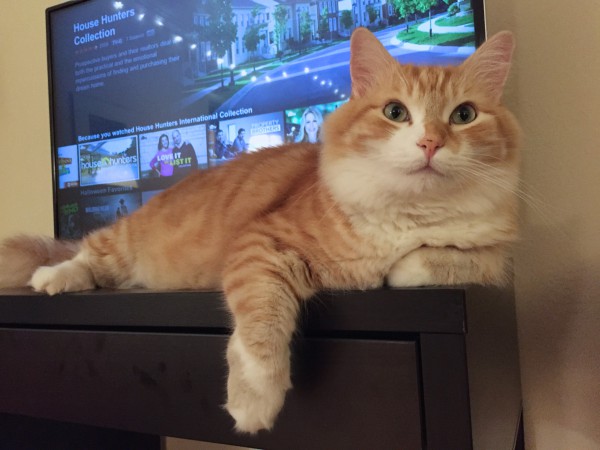 Deal Alert: If you sign up for four months of DishWorld, Roku Streaming Stick is free—or you can get Roku 3 for 50-percent discount.

Amazon's device is surprisingly smooth and satisfying. Performance doesn't match the set-top box model, which from a subjective speed perspective is best of class. The full Fire TV is so exceptionally fast, I suggest paying more and grabbing the device during one of Amazon's frequent, ah, Fire sales. But if budget or other considerations demand a stick, this one is excellent choice.

Amazon's UI is clean, bold, and bleeding screen. The apps selection is excellent, although it falls short of Chromecast (because of Android) or Roku Streaming Stick (for the sheer number channels). But the majority of popular services are available; and there is the retailer's own streaming service, which, unsurprisingly, is better presented and more navigable than on any other device.

Deal Alert: If you sign up for three months of Sling TV, Amazon's stick is free—or you can save $50 off the Fire set-top box.

I can't choose for you and wouldn't try. The benefits that matter most will vary among users and households. For some people, none of the three is best choice. Set-top box models Fire TV, Nexus Player, and Roku 3 all offer better benefits, starting with full gaming support. If you want game play as well as audio and video entertainment, the pricier, $99-range boxes are better choices. Voice-search offers so many benefits, the capability alone is reason to choose Fire TV or Nexus Player over Amazon and Google sticks.

So which is my choice? Chromecast, because I love using Android device as remote, and the majority of services I want are available. Amazon is the exception, which necessitate's using a second streamer. But our TV's HDMI ports only accommodate one stick, although a cord extender could enable others. The family's main box is Fire TV, which covers about 90 percent of our monthly streaming content. Chromecast covers the rest, such as Encore and Starz, and it's what I use most often (my prefers more traditional remote).

Apple TV fills the third HDMI port, but the box is there just to watch content foolishly purchased from iTunes. ATV is slow and buggy compared to the sticks (okay Roku's streamer is exception) or Amazon, Google, and Roku set-tops. In the future, when budget allows, we may swap in Roku 3 (I sold our first one last summer).