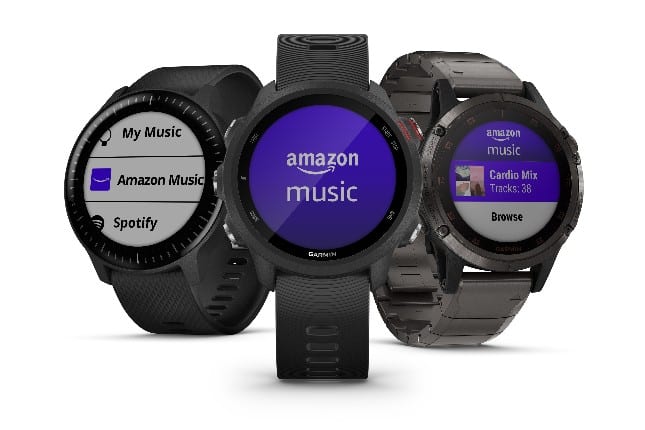 I recently canceled Amazon Prime, as I found the subscription to be deficient -- especially at $129 per year. What was wrong with Prime? Many things, such as the video library being atrocious and the included Amazon Music service having a very small library (two million songs). Amazon makes you pony up even more money to have a larger music library (50 million songs). Not to mention, the Amazon Music interface is nothing to write home about -- overall, die hard music fans should look elsewhere, such as Apple Music or Spotify.

But OK, let's say you are a casual music listener that takes advantage of either Amazon Music or the pricier Amazon Music Unlimited. If that is you, I have good news -- your music service is now available on some Garmin smartwatches!

"Amazon Music customers can now download and play music from their libraries, including their favorite songs and playlists, anywhere with Amazon Music on compatible Garmin smartwatches. With Amazon Music, Prime members have access to more than two million songs and hundreds of hand-curated playlists and stations at no additional cost to their membership. With an Amazon Music Unlimited subscription, customers will have access to Amazon Music’s premium streaming tier with more than 50 million songs, including the latest releases from today's popular artists. Customers who haven’t yet tried Amazon Music Unlimited are eligible for a 30-day free trial," says Garmin

Dan Bartel, Garmin's VP of global consumer sales explains, "As the first wearable company to offer Amazon Music, we are excited to collaborate with another key music provider to bring even more listening options to customers around the world. Music helps keep us moving during our hardest runs and workouts, and with Amazon Music, there are more than 50 million songs to choose from so you can stay motivated no matter where your training takes you."

Sadly, not all of the company's wearables are compatible with Amazon Music. As of now, it is limited to the models listed below.

If you own one of the compatible Garmin smartwatches above, and you are an Amazon Music user, you can get the app now. Simply go to Garmin's Connect IQ store to download it.