I'm an early adopter, and I can't help it 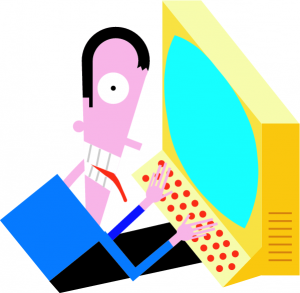 Second in a series. "My name is MB and I'm an addict" is what I would say at the first Early Adopters Anonymous meeting.

I'm driven by an addiction to try a product as soon as possible, at the earliest point in its life cycle and I can (silently) admit to it being a compulsive behavior. It's not that I don't enjoy it, but I feel that's what I should do with every new product that I can get my geeky hands on. Yes, that's the second confession, and I'm fairly certain it will not be the last either.

From my point of view, blatant consumerism doesn't cut it and only those walking the "geeky way" are the true early adopters; it's a way of doing things that characterizes it, not the simple act of getting hold of a product with no intention of using it.

One of the main reasons of being an early adopter is because I want. What do I want? I want to have an in-depth experience of a product. I want the personal connection. I'm not the same as everyone else, so I see no reason for waiting on a reviewer to tell me what he or she thinks of the product before I get a chance to fiddle with it; I simply choose not to be influenced by one's opinion over a product that I wish to get. My needs aren't necessarily their needs, and what they like might not suit me and vice-versa.

But personal desire is just part of my early adopter profile. Whether I like to admit it or not, the main reason for trying a new product is the innate need to satisfy my own curiosity. And though it may sound silly, I'm often bored by the same old software or hardware. To try new things is to cure the boredom. So in this respect, early adoption is a disease, but it is also a cure.

It's a mixed bag of rational and irrational behavior inside of a nicely wrapped "me" bag. The "itch" to try something new never gives the same "fix" that I used to get a few years back, and I find myself upping the dosage from time to time.

I start my latest early adopter story like any addict in the movies that tries to justify another bad move: "This time it's going to be different." This is how my Windows 8 story starts.

Once upon a time not too long ago, Windows 8 hit RTM status; if Microsoft "finished" it that only meant, in my mind, that I got a green light to try it.

I appreciate honesty. It is, after all, the first step to recovery. So, to come clean I have to mention that I'm writing this from Windows 8... and my typical early adopter case: curiosity got the best of me. I joined the Windows 8 experience as soon as I could, since I'm an early adopter and I can't help it.

Will I like it, will I hate it? I'm not a hundred percent certain yet, but there's only one way to satisfy my curiosity. Toying around is fun and I'm enjoying it like a child on Christmas Day. But reaching outside of the "new toy" aura, it is not difficult to spot three of the five elements of a typical early adoption case: hype, excitement, and high personal expectations. The other two components typical to every case, frustration and disappointment, haven't hit yet.

Windows 8 is a different experience and I enjoy it so far. The nasty problems of the past, which I will soon detail, are nowhere in sight. Spoiler alert: I like that it's different.

If the price is right, I'll be joining the Microsoft Surface bandwagon as soon as possible as well. Call me crazy, but I've got proper reasons for it. I'll just have to wait and see what happens after reality kicks in.

But let's rewind a few years, back to 2005, to get to the beginning of my Windows early adopter story. This is how it actually started and for me, it represents all the disadvantages of being an early-adopter.

First there was the hype: AMD Athlon 64 3200+ is the name of the "evil" hardware that made me do irrational things, all because I couldn't help but feed my early-adopter addiction. After all, what's not to love about one of the fastest CPUs at the time that wasn't breaking the bank and had --wait for it-- 64-bit support. 64-bit means better than 32-bit, right? Obviously I wasn't falling for the simple mathematical calculus or comparison between 32 and 64, but it was fast and since it was a 64-bit CPU it made sense, for me, to see how it matches with the software.

The excitement part came from the bits of code that made the first consumer-oriented 64-bit Windows. Luckily, around the same time I got it, Windows XP Professional x64 was released, and boy did I think things were going to miraculously change overnight and feel that speed and power.

I was, as any early-adopter can relate, expecting a steroid-like effect after I matched the 64-bit processor with 64-bit OS. It made perfect sense to expect a sense of belonging between the two.

Then frustration kicked in, as nothing that was 32-bit and required a certain level of involvement with the operating system worked as it did in the more common 32-bit Windows XP. WinRAR worked only from the program, as shell integration was broken because it was not 64-bit compatible. Security software? Not a chance, but it did get me into beta-testing security software because I wanted to help speed things up which created another issue in itself. Not only did I not have all the programs that I needed fully working or even working at all, I was actually investing my free time into helping security software companies develop compatible products.

From Amazing to Awful

After all this experience, 64-bit left me completely disappointed, and I still believe it was the most frustrating and disappointing experience possible for an open-minded early-adopter. What makes me shake my head in disappointment is that even seven years after Microsoft introduced Windows XP Professional x64, not much has changed. Whenever possible, developers run away from native 64-bit software and as bad as that is, even Microsoft is keeping 32-bit alive and well within Windows 8. Should it happen? 7 years ago, yes, but now it shouldn't be the case.

Early adopters have a direct connection with the always-amazing realm of new technology which is sprinkled with a few drops of "amazing" and just as important pinch of "awful." Indeed, it's rightfully a mixed-bag and all easily justified by the initial moments of the joy of being one of the first. It comes with plenty of benefits, it's a natural compulsion for technology enthusiasts like me and it simply doesn't go away, probably not without some sort of treatment. Is it worth it? For me, 100 percent yes! For the majority of the time, good experiences outweigh the bad ones, and this is reason enough for me to keep on trying new things.

Not all my early adopter stories are a crash and burn, there's at least one that skipped all the bad parts altogether and by the looks of it, it's going to be Windows 8. Call me crazy (again), but I'm positive about Windows 8 and so far I enjoy being its early adopter. It's almost exactly as I imagined it and it doesn't have the ring of a "horror" story. The benefit of being an early adopter, like I've mentioned earlier, is that I can make up my mind on my own and decide whether I like it or not. All the possible bad experiences could have steered me away, but I chose to try it now. Will you join the Windows 8 early adopters team or sit this one out?

All the early adopters out there, what are your experiences?

27 Responses to I'm an early adopter, and I can't help it