My Apple boycott is over 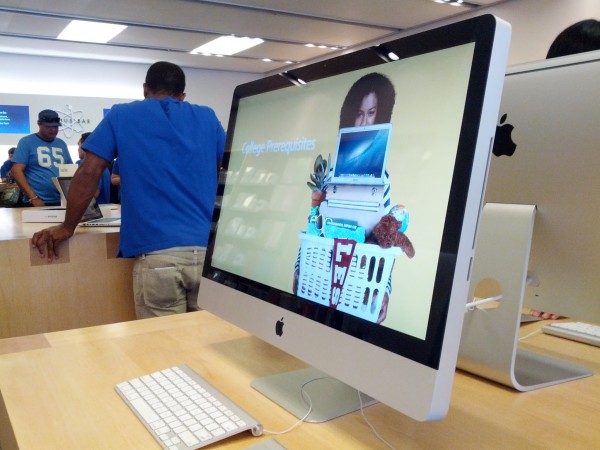 Suddenly, I feel sorry for the folks over at Apple. Chicken Little bloggers and Wall Street analysts run round crying "The sky is falling!" Strangely, they are believed. Apple shares are down 38 percent from September's all-time high. On Friday, the company's market cap fell below Exxon's. Suddenly, the world's most valuable company isn't. I just don't feel right kicking fruit as it falls down, so as a gesture of goodwill my boycott ends today.

That's not to say I have plans to buy any Apple products. I'm more than satisfied with Chromebook and my three Nexus devices. That said, as an act of solidarity, I let Apple auto-charge my credit card for iTunes Match renewal today. I don't own a single device that supports the service, but, hey, what's $24.95 between friends? I was a loyal OS X and iOS user until my boycott started in June 2012, protesting aggressive patent lawsuits -- unaffectionately called innovation by litigation.

The reasons for my boycott are unchanged. Apple is still a patent bully that also intimidates others. But following my boycott, Apple made a series of missteps that sent stock and brand perceptions steeply downward. Siri still sucks. iPhone 5 underwhelms. Releasing Apple Maps makes the exec team look petty (dropping Google's product in process) and incompetent. iPad mini costs too much. Court-ordered apology to Samsung misleads and lies.

From that perspective, my concern: Should sympathy swell around Apple's state, boycotters could cause even more. Arrogant, highest market cap, cash-hording (mainly overseas) Apple is easy for people to hate. But fallen Apple is sympathetic. So I have another reason for backing off the boycott, which shouldn't be reason for anyone to feel even sorrier for the company.

Not that there is any real reason for sympathy. During calendar 2012, Apple generated $164.7 billion revenue, which is considerably more than Microsoft ($73.2 billion) and Google ($50.18 billion) combined. Net profit reached $39.58 billion, or more than twice Microsoft (when including a goodwill charge). Even fallen, Apple is a mighty fruit.

I wouldn't worry that anyone working there will go hungry. Cofounder Steve Jobs left behind a money machine, unlike anything seen since Microsoft, which, no coincidence, led the last computing era. Apple may be contender to lead the cloud-connected device era, but cracks in the facade are everywhere.

1. Rising negative perceptions. For years, Apple was a perception stock, largely buoyed by smart marketing and Jobs' ability to cast the so-called "Reality Distortion Field", while generating cult-leader like adoration. Perceptions that lifted the stock high, now lay it low. How ironic, the people writing obsessively about Apple before continue to do so, but with more negative tone and concern as the bottom drops out of stock and brand.

2. "Where's the innovation?" It's a common question among the Apple-obsessive. As 2013 started, analyst, blogger, reporter and social commentator puppy-love adoration gave way to persistent angst-questions about what's next and why the stock, which soared in September, soured through most of fourth quarter. Everyone pines for Jobs' "One More Thing" -- that category creating or redefining new product and didn't get it. Apple isn't delivering.

Meanwhile, iPhone 4 and huge iPhone 5 launch in China lifted fourth quarter -- yes, iPhone 4, which Cook says was supply constrained for all three months, and that during iPhone 5's first full quarter of sales. Carriers use subsidies to insulate buyers, offering iPhone 4 for free and 4S for $99. Those prices also determine iPhone's perceived value to consumers, which for many is zero -- they are unwilling to pay anything. Higher sales of lower-cost models mean thinner margins for Apple.

Then there is Android, which continues to widen its lead over iPhone, in large part thanks to Samsung. In fourth quarter 2011, Apple shipped more smartphones than Samsung -- 23 million and 22.5 million, respectively, according to IDC. A year later, Samsung shipments rose 76 percent, with 63.7 million smartphones to Apple's 47.8 million.

4. Concerns about iPad mini. The tablet costs either too much or too little. For the too-much crowd, iPad costs between $329 and $659, but based on BetaNews polls and analyst data, the sweet spot in the 7-7.9-inch tablet category is $199. If consumers continue to flock to lower-cost tablets, Apple loses. Meanwhile, the too-little crowd has a point. Every iPad mini sold helps to preserve Apple's tablet market share but saps margins.

By my math, in fourth quarter, iPad category average selling prices fell 12.3 percent sequentially -- from $535 to $467. But there's more! Year over year, iPad ASPs are down $101, Apple's CFO admits. Only the company's inability to manufacture enough minis to meet demand during fourth quarter kept matters from being worse.

If I was anti-Apple, and I am not, all this trouble would be welcome. Something to really cheer about. But I like Apple, which is major reason for the boycott in the first place. I expect more from the company, and look sadly on greatness shaken from the trees as frost bites the crop.

Apple must learn from a bitter rival. Google innovates in all the ways, and more, Apple is perceived to. Name a day when there isn't something new coming from the double-oh company -- innovation at truly Internet speed. Meanwhile, at Apple, for all the talk about capitalizing on the so-called post-PC era, development goes at the old pace. Hell, the patent lawsuits move faster than Apple innovation. Last week I offered some pointers on how the company can get its mojo back. Perception, and reality, can with commitment.

But I wonder, observing the stark contrast of leadership. During the same week, Apple CEO Tim Cook and Google Executive Chairman Eric Schmidt made major trips to Asia -- to China and North Korea, respectively. Cook culled relationships and deals in what he calls Apple's most important country. Not North America, baby. His trip was really about money. Meanwhile Schmidt's trip was more a goodwill mission. He and his daughter offer fascinating reflections, you should read. From the perspective of shareholders, Cook's priority is right. But, personally, as a non-investor, I like Schmidt's priority more.

Wrapping up, I'm still unhappy with Apple corporate behavior; now that perception, brand and stock sink, many more people are dissatisfied, too. I'm just one person, but every burden lifted must mean something. I'm off the boycott bandwagon, as you should be.

103 Responses to My Apple boycott is over